Key to achieving APEC's vision are what are referred to as the 'Bogor Goals' of free and open trade and investment in the Asia-Pacific by 2010 for developed economies and 2020 for developing economies. These goals were agreed by APEC Economic Leaders in Bogor, Indonesia in 1994. To achieve these goals APEC Member Economies developed a framework in Osaka, Japan in 1995, which set out three key areas of cooperation. Known as the 'Three Pillars' of APEC, these are the areas of Trade and Investment Liberalization, Business Facilitation, and Economic and Technical Cooperation.

The idea of APEC was firstly publicly broached by former Prime Minister of Australia, Mr Bob Hawke, during a speech in Seoul, Korea in January 1989. Later that year, 12 Asia-Pacific economies met in Canberra, Australia to establish APEC. The founding members were: Australia, Brunei Darussalam, Canada, Indonesia, Japan, Korea, Malaysia, New Zealand, the Philippines, Singapore, Thailand and the United States. China, Hong Kong, China and Chinese Taipei joined in 1991. Mexico and Papua New Guinea followed in 1993. Chile acceded in 1994. And in 1998, Peru, Russia and Viet Nam joined, taking the full membership to 21. Between 1989 and 1992, APEC met as an informal senior official and Ministerial level dialogue. In 1993, former United States President, Mr Bill Clinton, established the practice of an annual APEC Economic Leaders' Meeting. A moratorium on new membership stands until the end of 2010, at which point APEC member economies will consider whether or not to lift the moratorium. 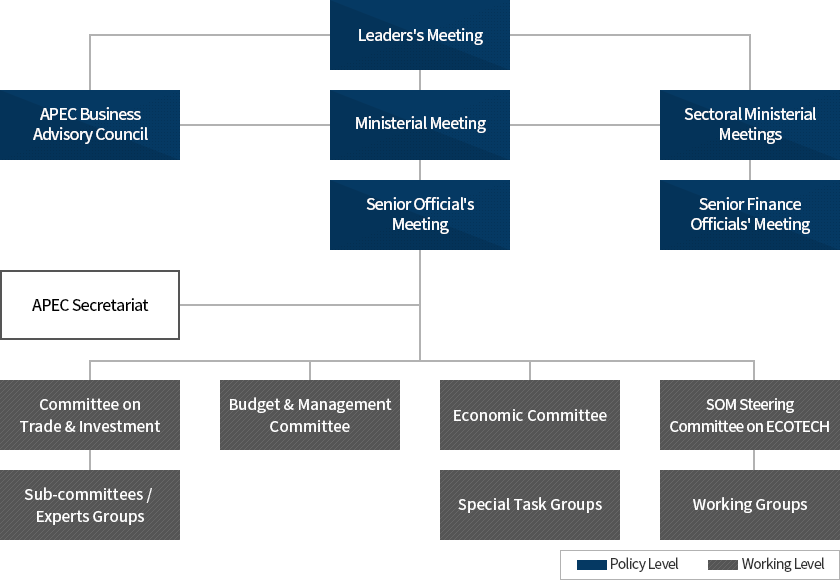 The APEC Secretariat is based in Singapore and operates as the core support mechanism for the APEC process. It provides coordination, technical and advisory support as well as information management, communications and public outreach services.
The APEC Secretariat performs a central project management role, assisting APEC Member Economies and APEC fora with overseeing more than 250 APEC-funded projects. APEC's annual budget is also administered by the APEC Secretariat.

The APEC Secretariat is headed by an Executive Director, currently Ambassador Muhamad Noor Yacob. 2009 marks the last year when the position will be held on an annually rotating basis by an officer of Ambassadorial rank from the host economy. From 2010 the appointment will be made on a fixed-term basis (3 years) and is open to professional candidates from any of APEC's 21 member economies.
The APEC Secretariat is staffed by a small team of program directors, seconded from APEC Member Economies. In addition, professional staff fulfill specialist and support functions at the APEC Secretariat.

Terrorism poses a direct threat to APEC's vision of secure, open and prosperous economies. APEC Leaders have pledged to help secure the region's people and its economic, trade, investment and financial systems from terrorist attack or abuse and trade-based money laundering. Their commitments to undertake individual and joint actions to counter terrorism are expressed in two principle statements - the 2001 APEC Leaders Statement on Counter-Terrorism and the 2002 Statement on Fighting Terrorism and Promoting Growth - and in every subsequent annual Leaders' Declaration.

Bearing in mind Leaders' instructions to monitor progress and build capacity in counter-terrorism, the APEC Counter-Terrorism Task Force was established in May 2003 to:

Given the continuing threat the region faces, APEC Senior Officials have extended the CTTF mandate for the period 2009-2010. APEC Leaders also emphasise the important role played by the UN and its Global Counter-Terrorism Strategy, and have stressed the need for implementation, where applicable, of UN counter-terrorism measures and the Financial Action Task Force's(FATF) Special Recommendations on Terrorist Financing.